On the way home!

Final day, an early morning rise for breakfast, a morning safari drive with our great guides. We missed out on the elephants but loved the whole experience of being out on the jeeps , saw loads of pumbas and different types of rare antelope. The landscape was beautiful. We then had a quick walk around the Zomba plateau to look at some of the natural waterfalls, a little packed lunch picnic and then back to Blantyre. After a hefty dinner of spaghetti Bolognese, and *finally* a game of Empire which Harry has been proposing all week, we have a lovely moment to reflect with each other, the leaders, and the teachers who worked hard to make the whole thing happen. Homeward bound in the morning. See you all 7am at Heathrow (or back at Hurst!!). Thank you Malawi, you’ve been wonderful! 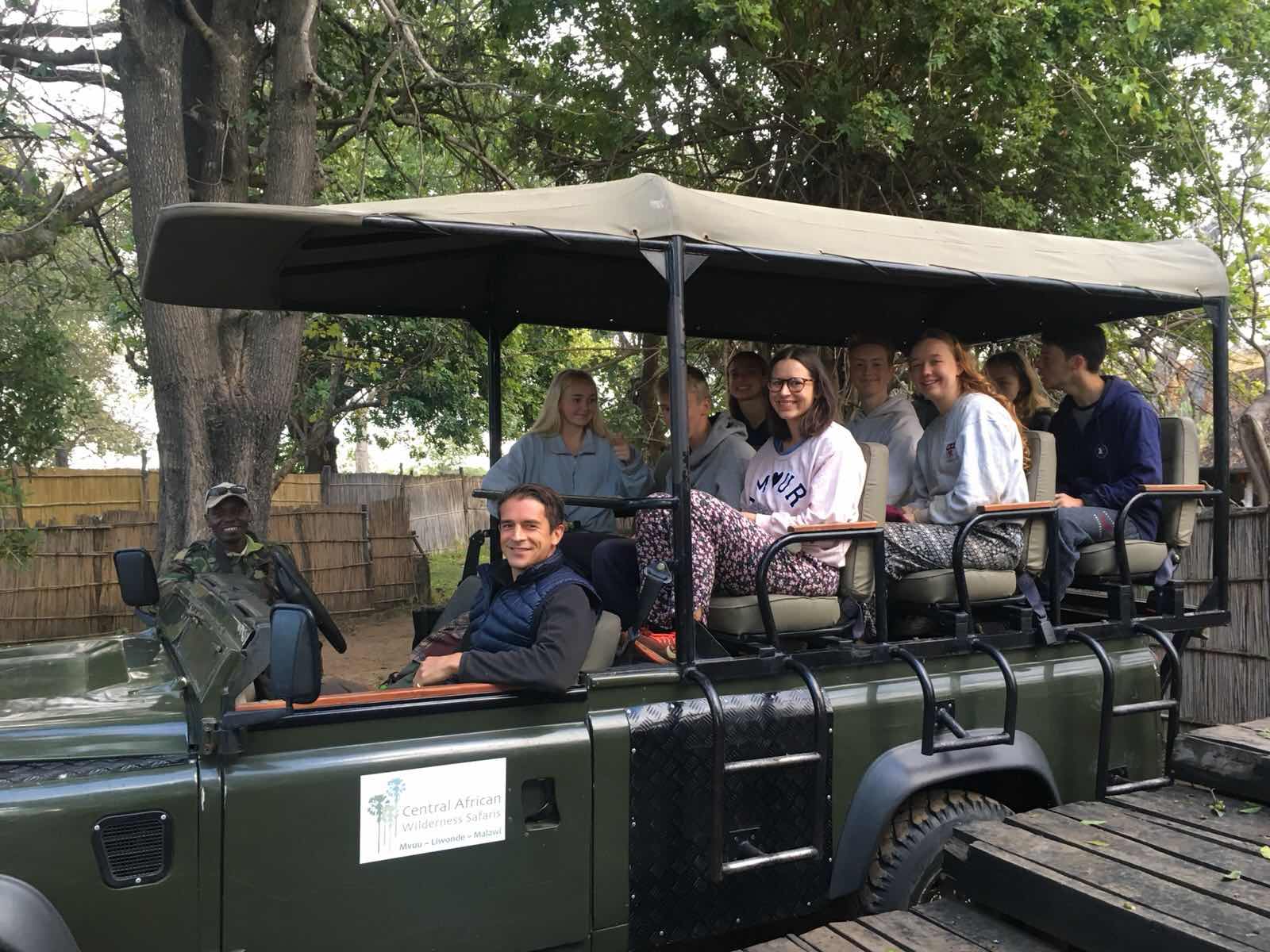 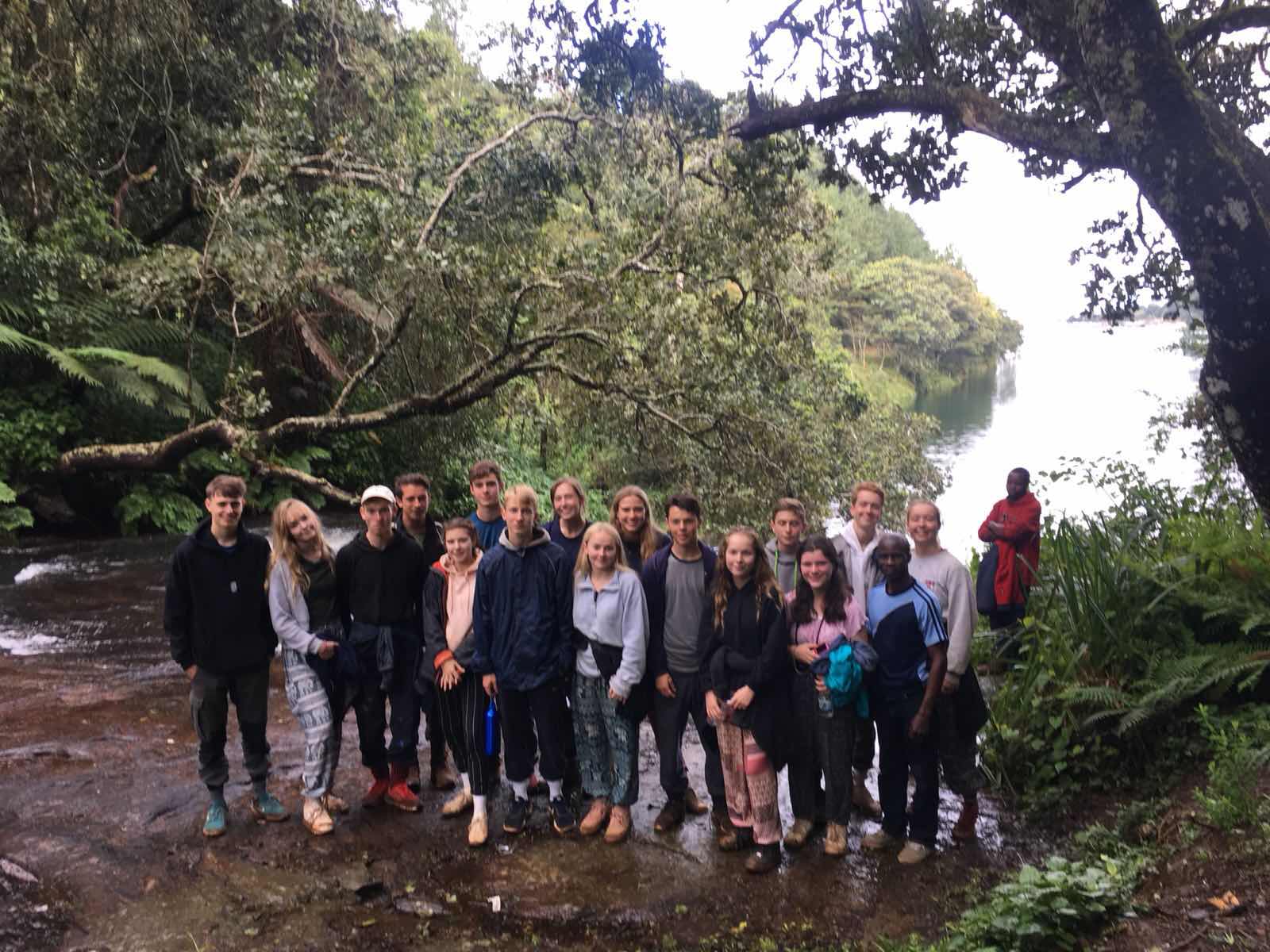 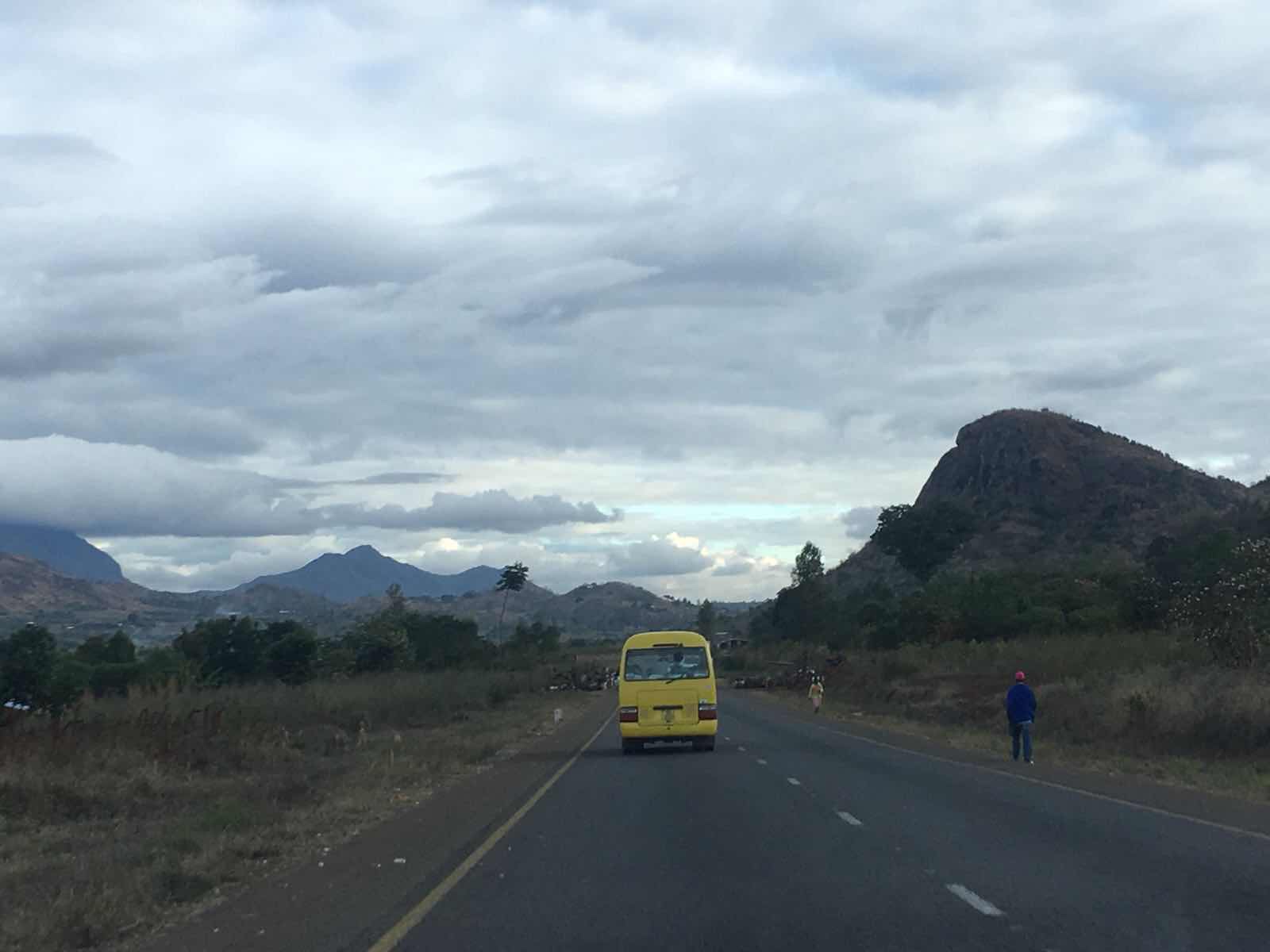 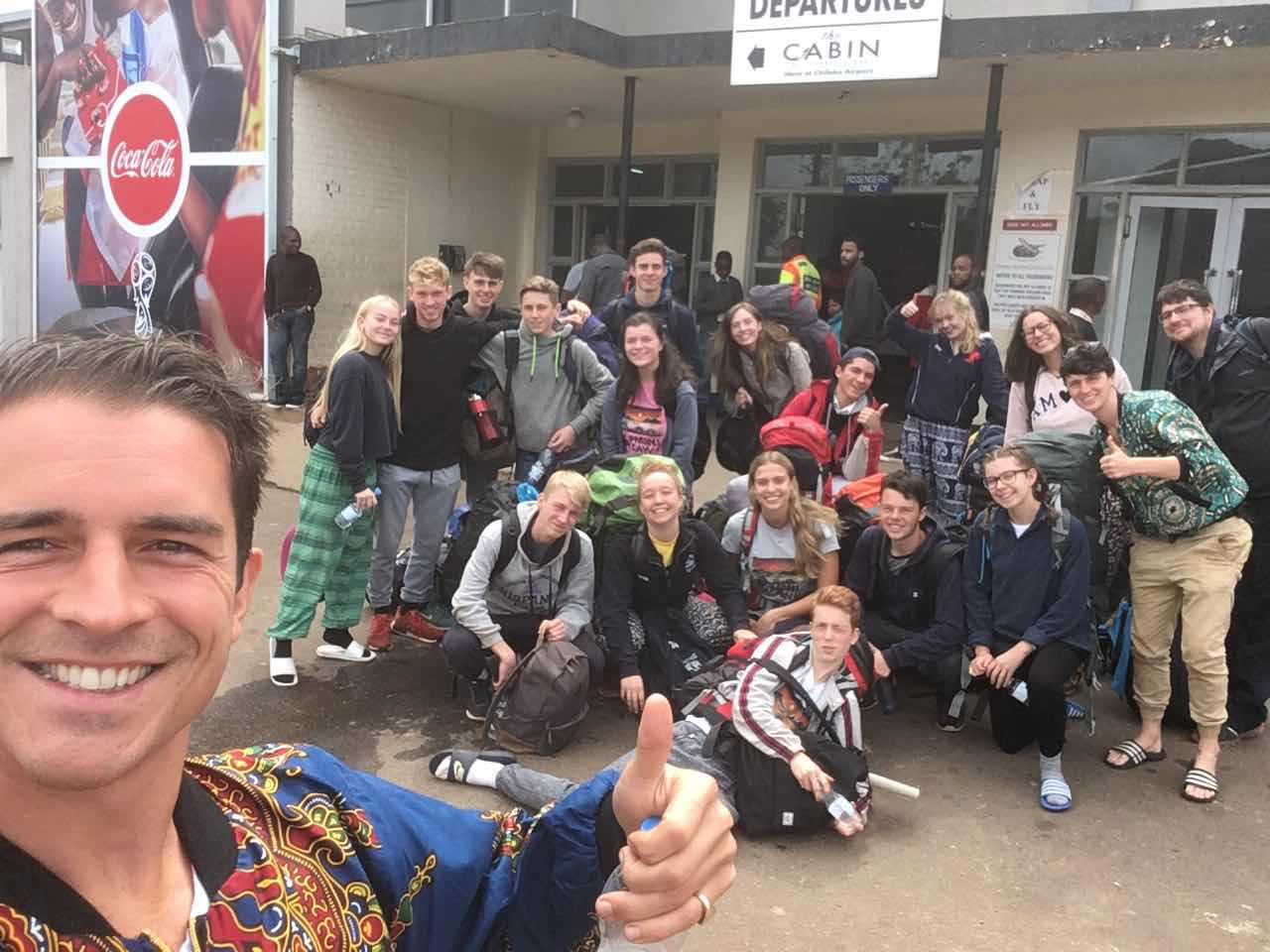 Posted by Inspire Worldwide at 02:44 5 comments:

Very early start this morning at 5:30am for setting off for safari, we took a 4 and a half hour journey broken up by a mandazi break. We then arrived at liwonde national park, and it was the most amazing boat ride across the river taking in our first glimpse of hippos and elephants to reach our campsite. We were very pleased to have proper showers and toilets, Harry even admitted that he sat on the toilet just to sit on a toilet! We set up our tents, and went for tea and cakes in our new found luxury. Little did we know, that we were not the only ones excited for cake - as, quick as a flash, a small baboon leapt across the table, and in one fell swoop, swiped the cake straight from Jacks hand!
It was then time for our river cruise where we explored the Malawian river life of hippos and crocs with some gorgeous birds. We are now sat gatherered around a fire excited for the big bbq we are having for dinner, and are preparing for an interesting night of wandering wildlife as we huddle together in our tents... 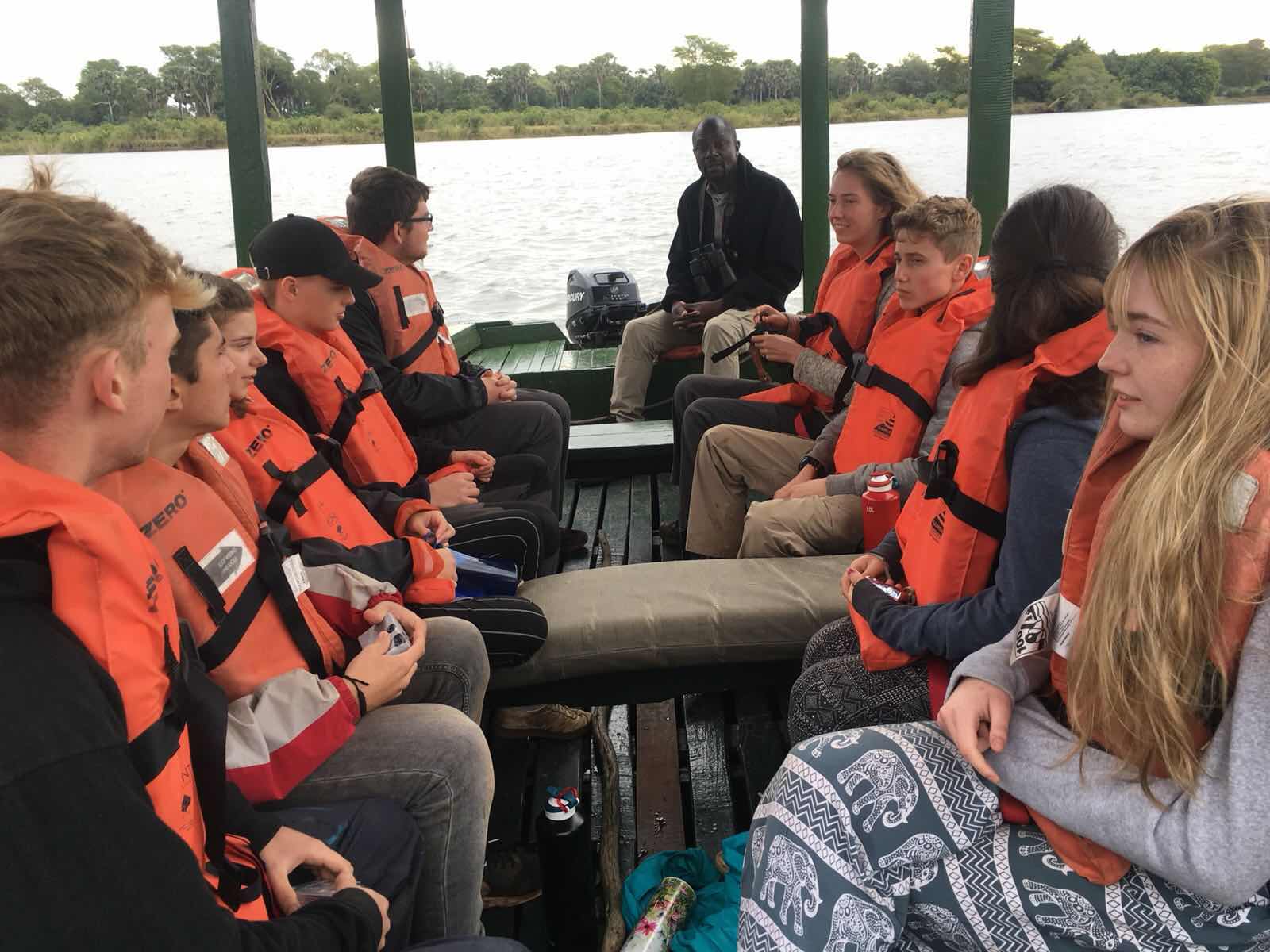 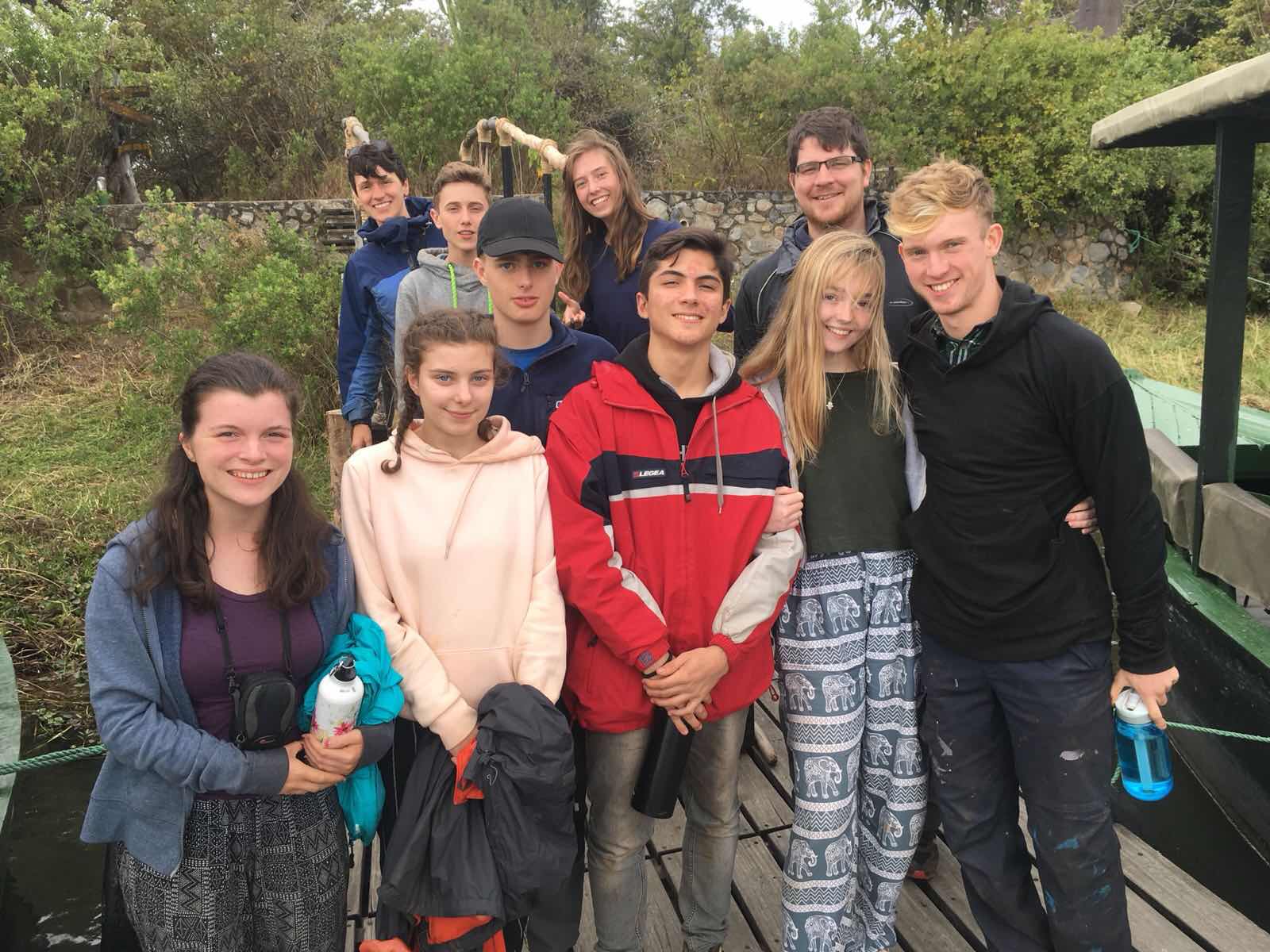 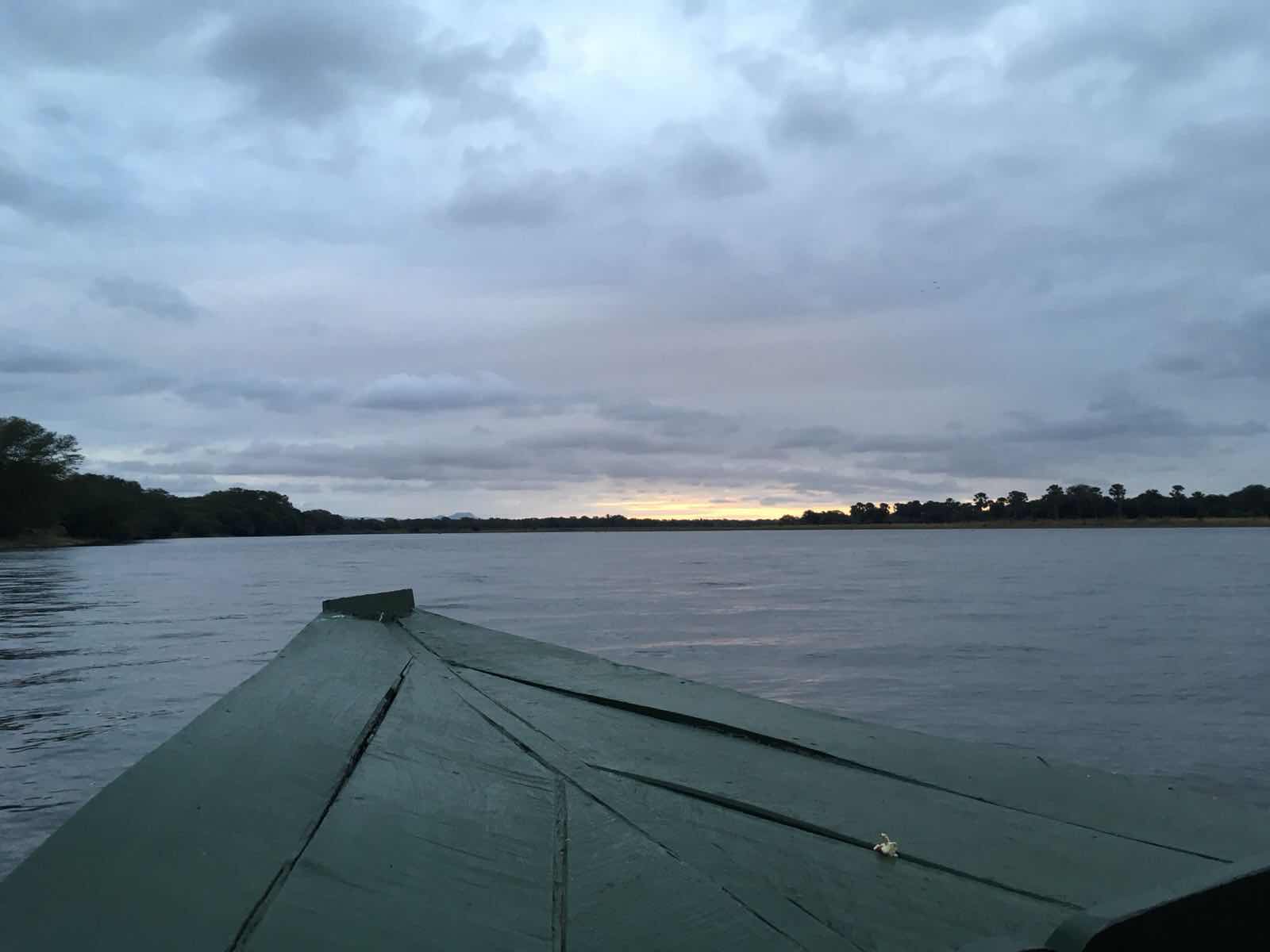 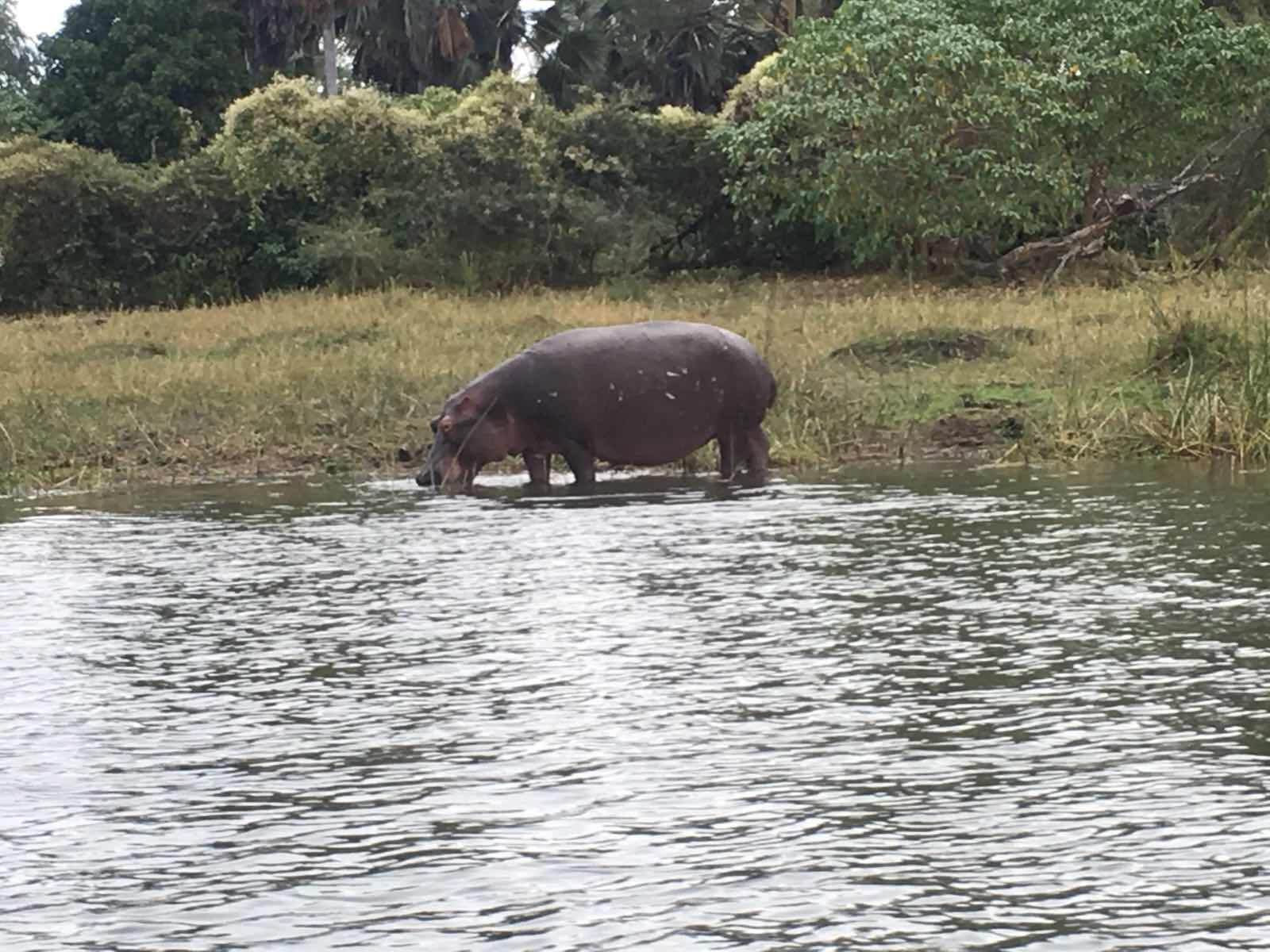 Posted by Inspire Worldwide at 13:10 3 comments:

Today we wrapped up on project leaving our own stamp on one of the classrooms. Tidying had begun with a lot of sweeping and mopping to get rid of the mass of mud. We then prepared a community lunch for all key members of the local community - Idah’s food was received greatly as usual, it was then time for the closing ceremony where speeches and dances showed the appreciation of us and the community. We gave our own versions of two Malawian songs (in Chichewa). Amy and Archie’s dancing stood out as a particular talent, even attempting twerking Malawian style. Tomorrow is a very early start leaving at 7am to safari to see the wildlife of liwonde National park before returning home to our favourite meals... please! 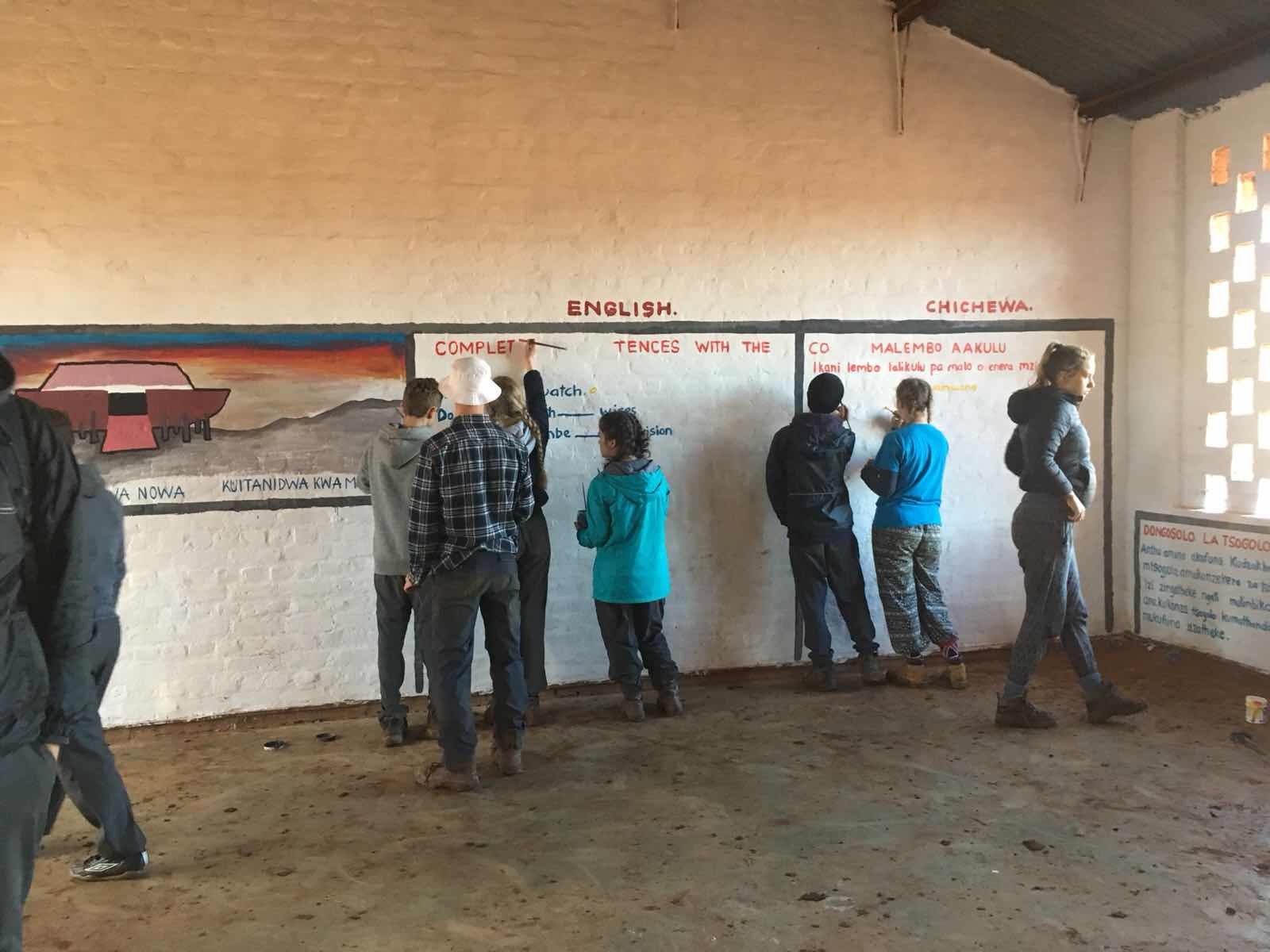 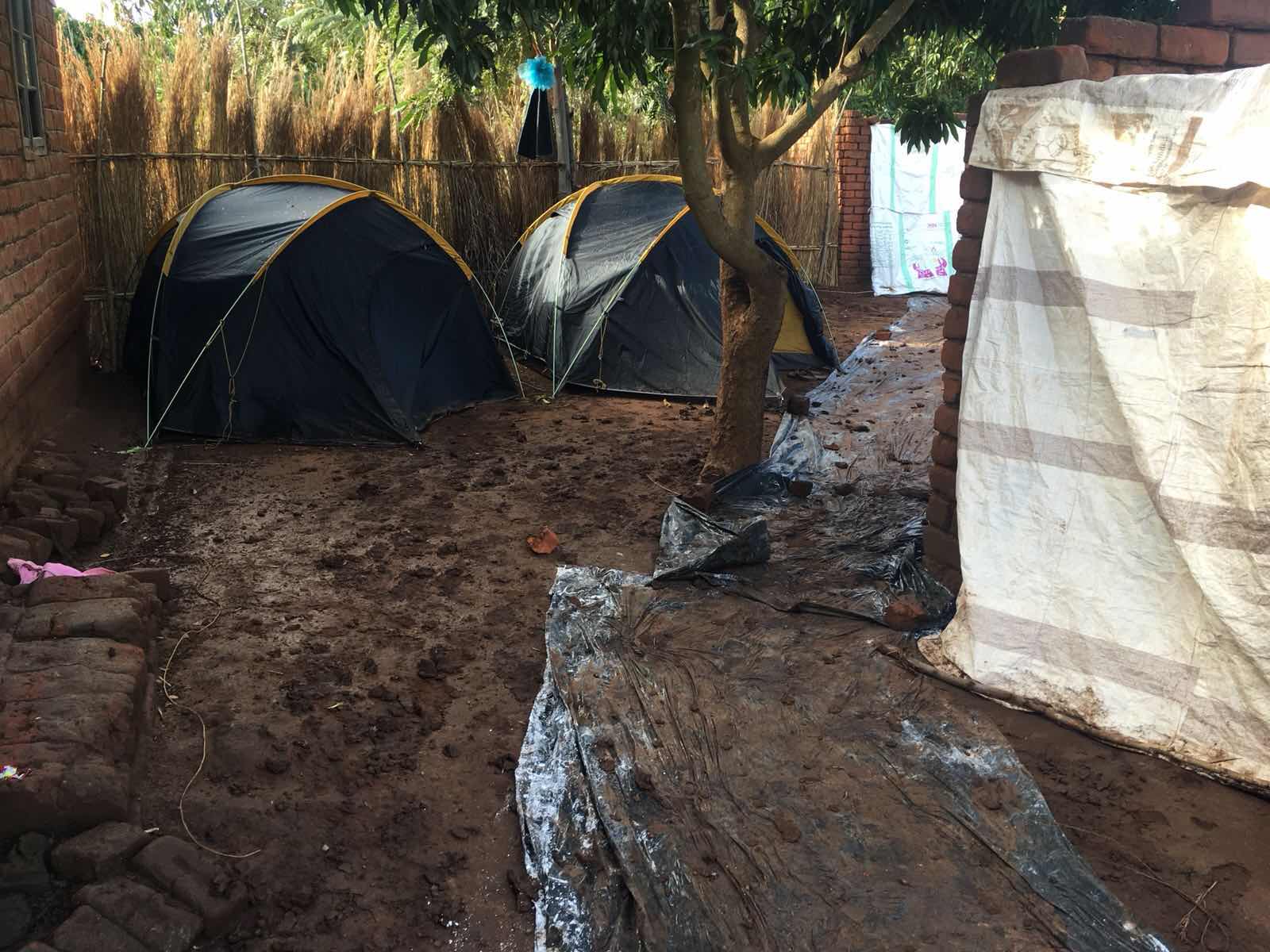 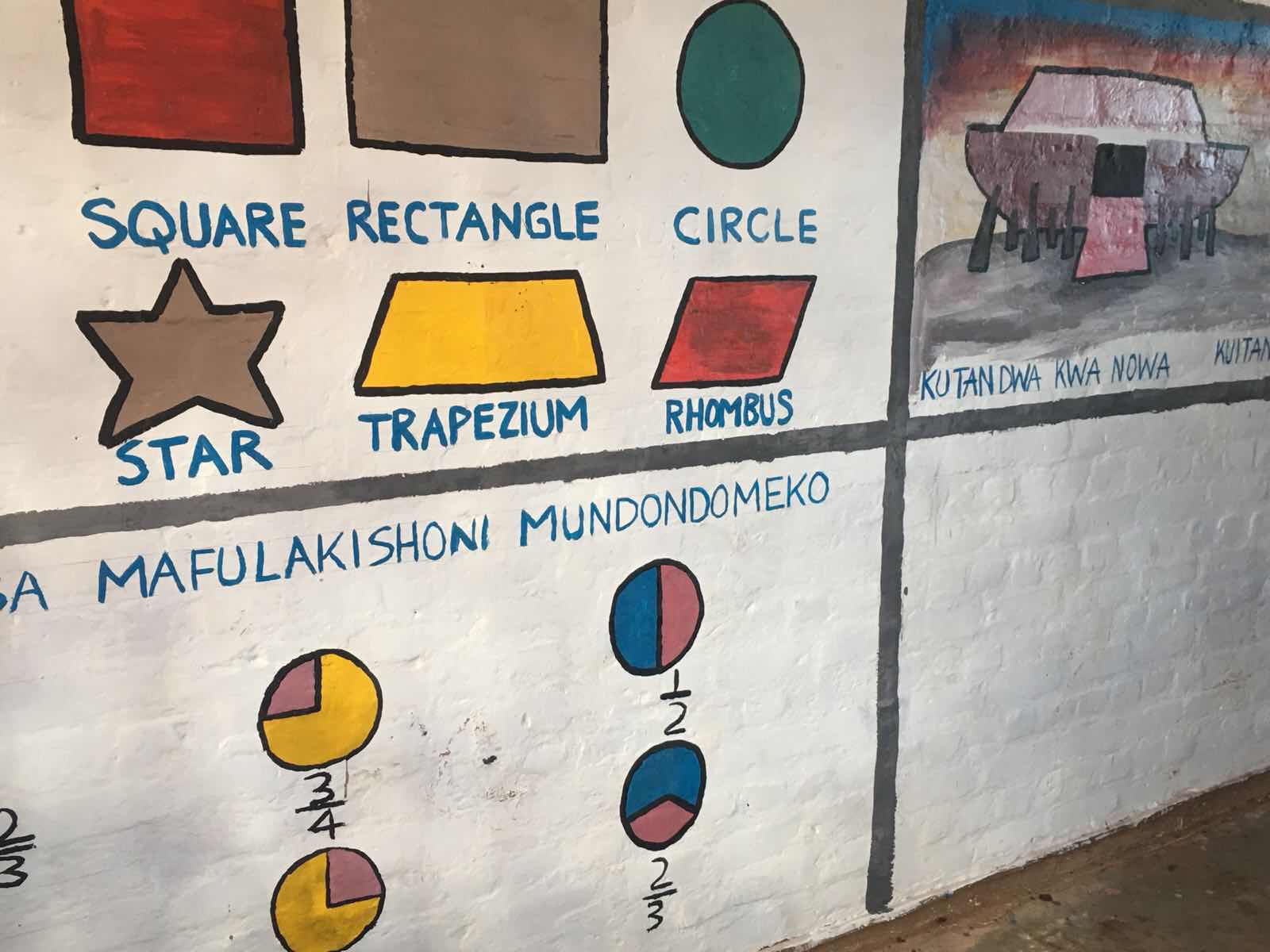 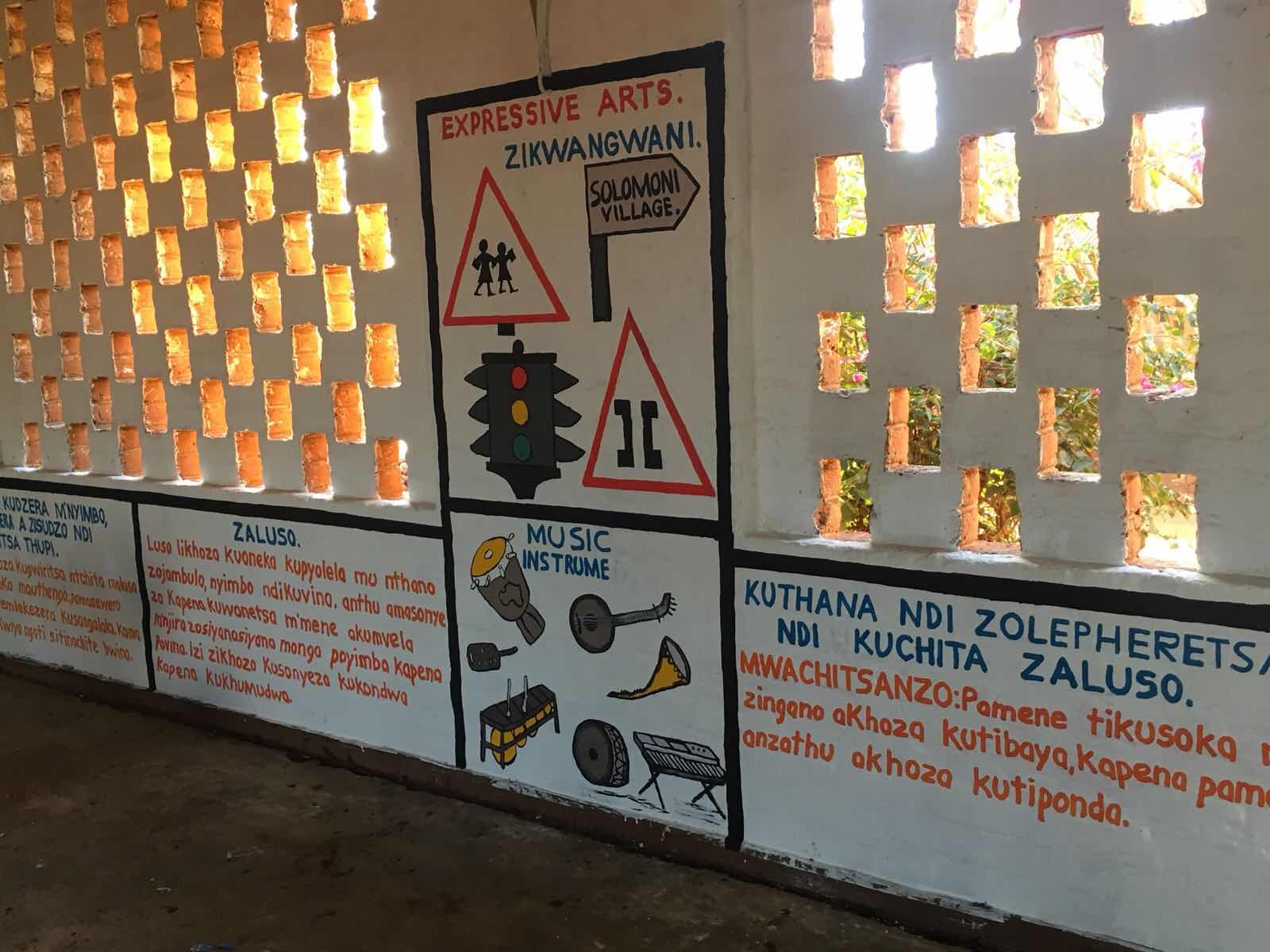 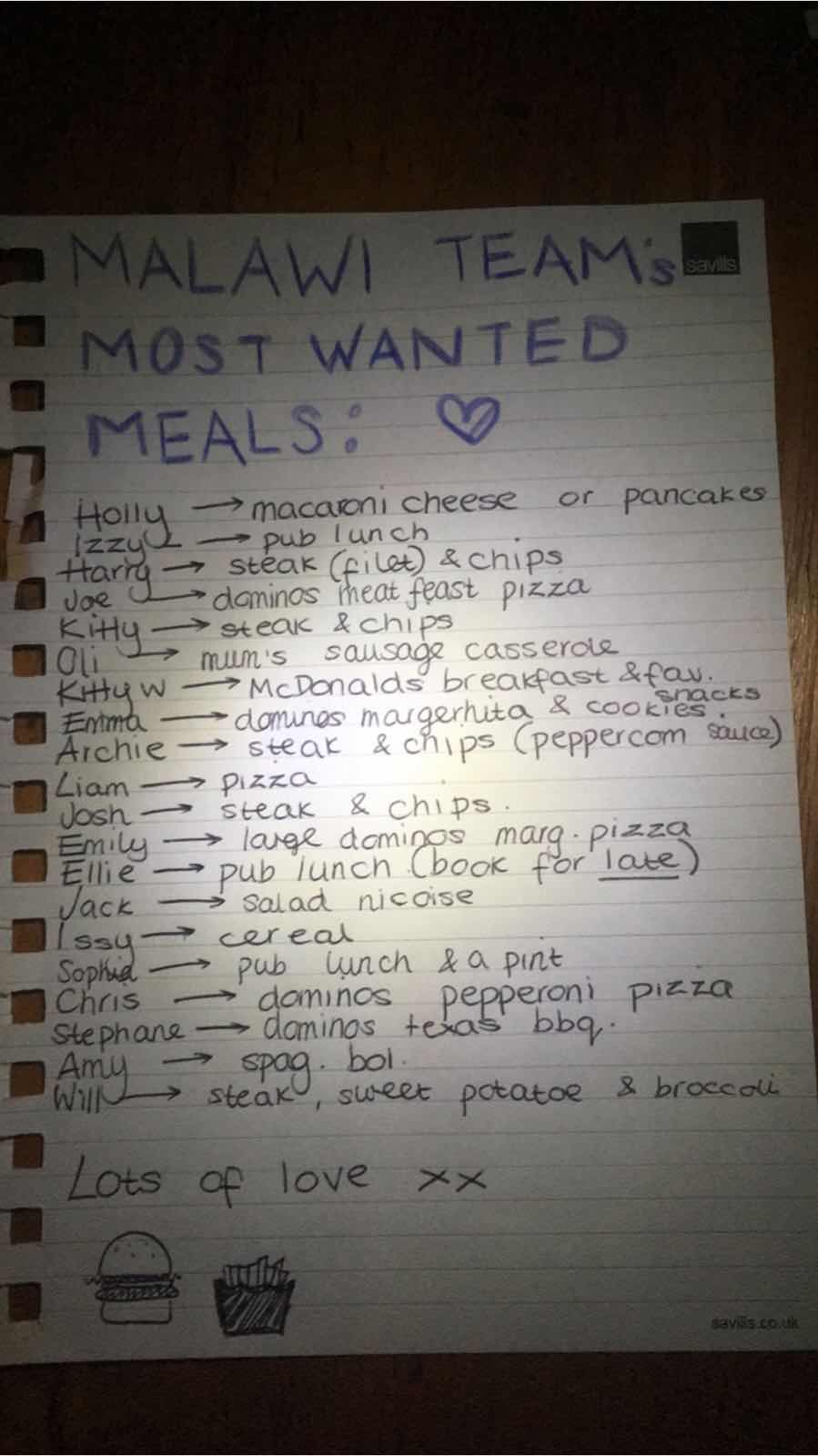 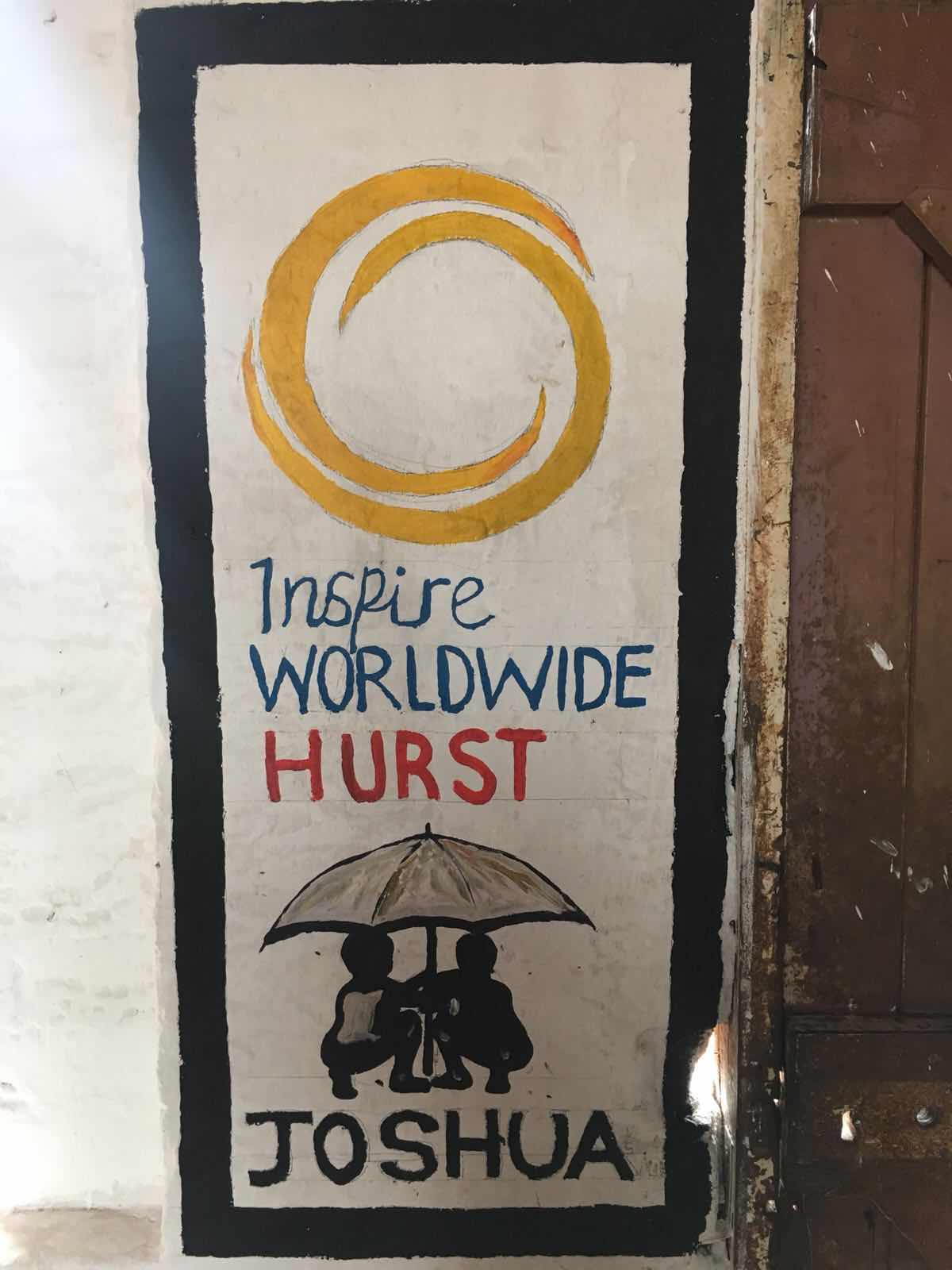 Waking up to grey skies this morning for our final full day of project work. We were shocked to find ourselves missing the dust which has now been been replaced by ‘mountains’ of thick, squelching mud.
The murals are starting to really come together and starting to resemble our own school boards. A few people’s art skills were limited - especially Liam, who was followed around by Emily who was correcting his wonky lines!
To brighten our spirits on this cold wet day, and after the death of our dear friend Larry the Lizard,  Sophia and Ellie delivered the goods in the form of hot chips as a break time treat!
After lunch, the sun decided to shine a little which greatly lifted the group as rain coats (and feet) have been getting rather soggy.
Bucket showers, and card games, and a few blankets for huddling in, and tonight is an absolute treat of Bean burgers and chapattis - thanks Idah!!
We are all looking forward to the closing ceremony to show off our newly learned songs before heading off to Safari with warm showers!! (We hope)!! 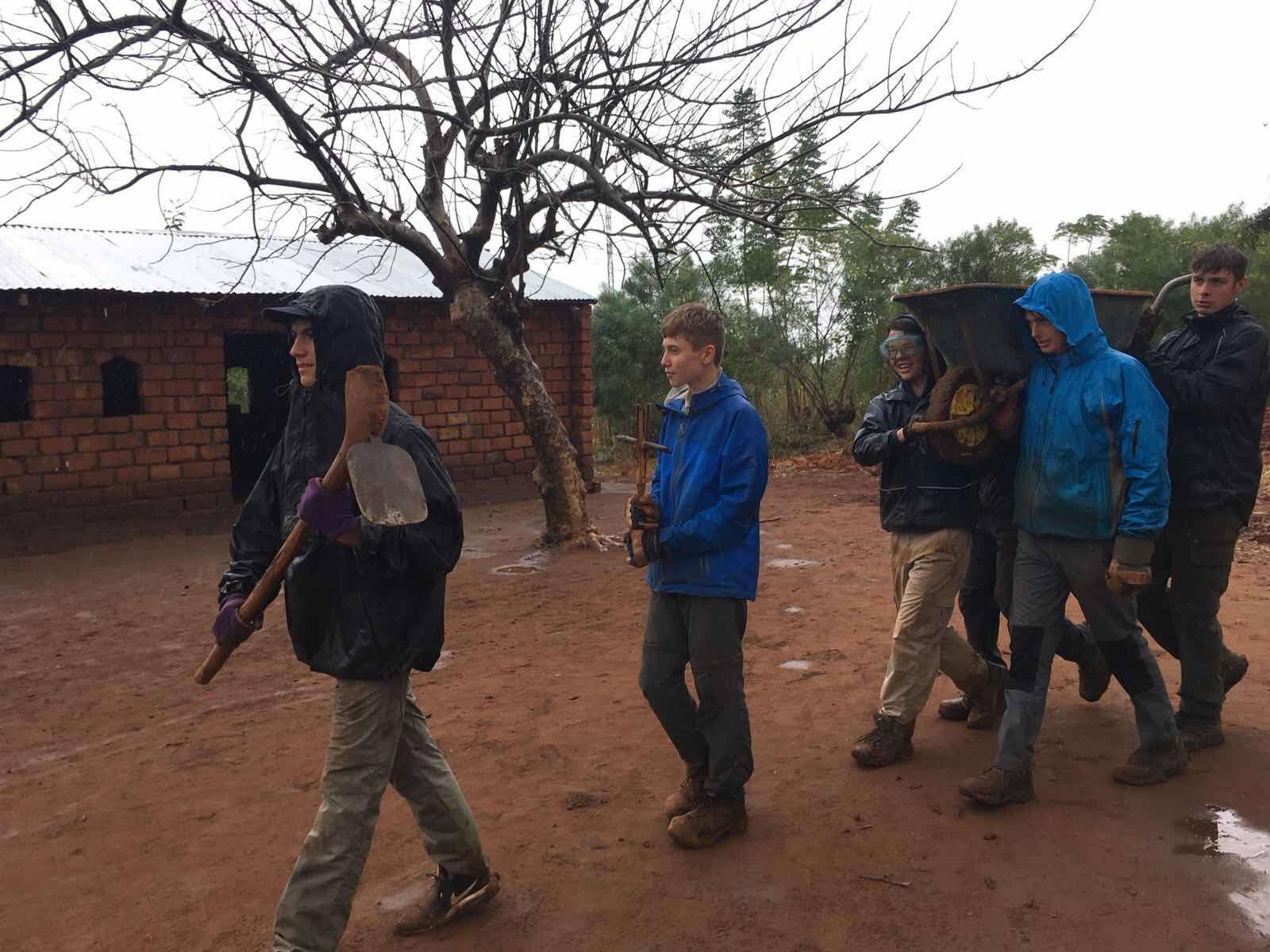 Posted by Inspire Worldwide at 14:42 No comments:

“Bless the rain down in Africa” was the song that came to mind when we reflex on today as the heavens truly did open on us making us feel back at home! The dust turned to mud making the whole area one massive obstacle course and enabled everyone to practise their ice skating skills in prep for next season. The pouring rain allowed us to get to know each other even better than we already did while we discussed all sorts of topic from views on current affair to what vegetable we would most like to be and everything in between. The projects are still being completed with only one more full day tomorrow which is helping to  keep us motivated as a nice warm bed is now in sight. We have just sat down for dinner in some questionable outfits to keep us toasty using skirts as scarfs and work gloves to keep hands warm!  Get the clean bed sheets and roast dinners (expect of course for Liam) ready for our return.

A note from Inspire - Sophia and Jack (the Inspire leaders) have sourced blankets, hot chocolate, and are making sure everyone eats lots and stays warm! The team are doing really well in some unexpected and unusual conditions.

Posted by Inspire Worldwide at 04:18 2 comments:

Dear all,
The team have been a bit deluged by rain (!) today- so have had an early night after hot tea and biscuits!
Blog to come tomorrow when it’s a bit drier!
Many thanks
Team Inspire
Posted by Inspire Worldwide at 15:11 No comments:

Today was a community day, rather than a project day, which allowed us to experience local culture in more depth.
The morning started with a lovely local craft market, which came to us, where some of us got much better deals than others - a book which Emma bought for 5000 kwacha which later Stephane bought haggling his way to only 3000 kwacha; safe to say Emma got the poor end of the deal!
We then explored the local area, visiting the river which was previously used for drinking water (before the installation of the much cleaner and more reliable borehole), and where we saw young people employing interesting fishing tactics, the brick making areas, and we were even lucky enough to see some of our new friends in their own homes.
After lunch it was our first experience of a church service in Malawi. We were asked to sing so we gave them our rendition of ‘Jerusalem’ and ‘shine Jesus, shine’ which weren’t quite up to the same energetic standard as their hymns had been. We were all in agreement that if church services were as fun back home, we would be much more likely to attend Sunday mass!
After the drums and the trumpets of Sunday service, we had a reflection run by our day leader Joe. Some people noted the differences we had seen today: how likely young children were to look after each other and their siblings - even carrying them to and fro - and how infrequently we see that in the UK; how fortunate we are to have so much, and with how much joy this community thrives with so little; the interesting gendering of the church service; and how physically demanding the life of a rural Malawian is. Lots to process.
Tomorrow is the start of the last two full days on project, so off for an early night.
Goodnight xoxoxo
Hurst team 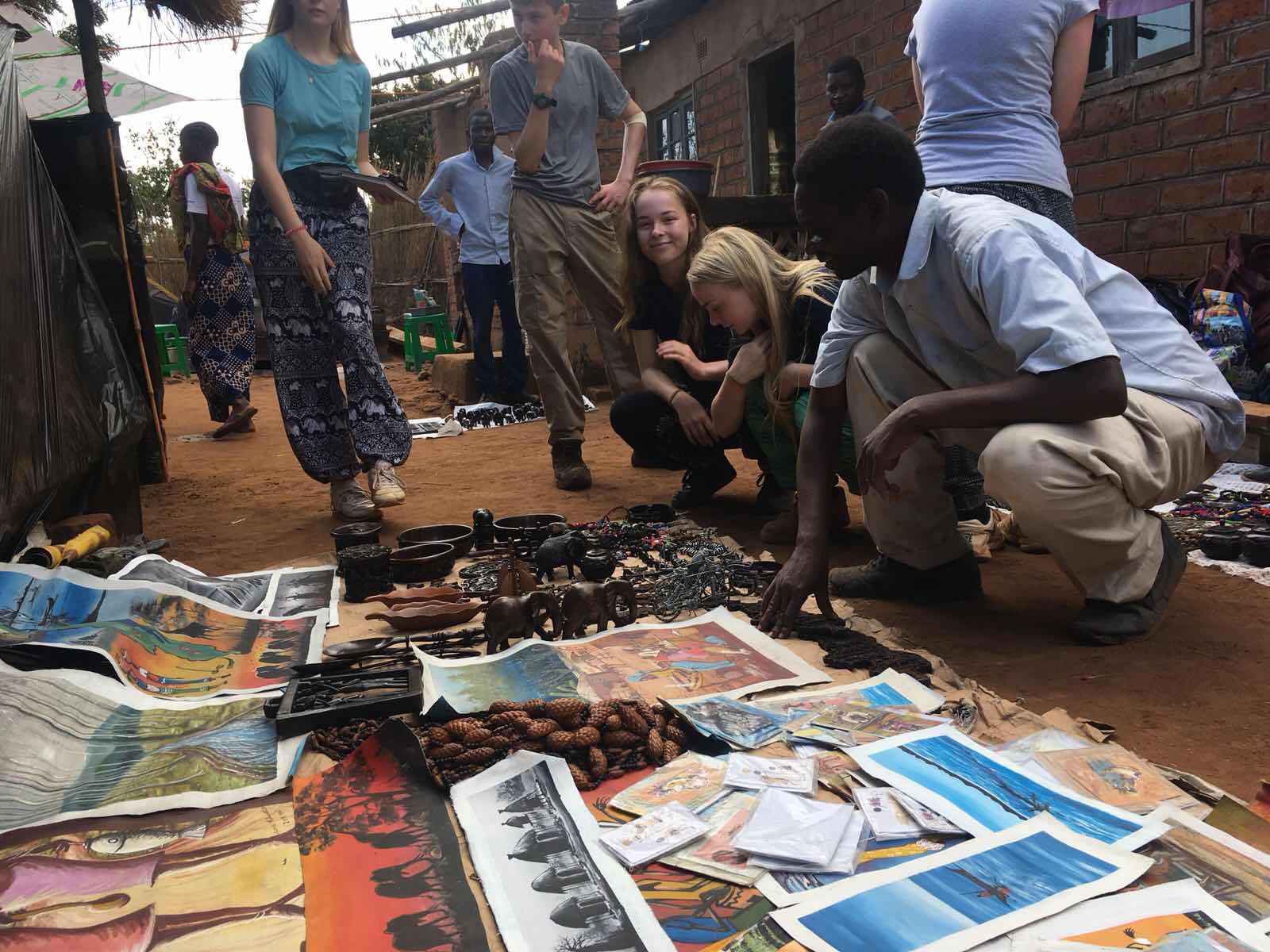 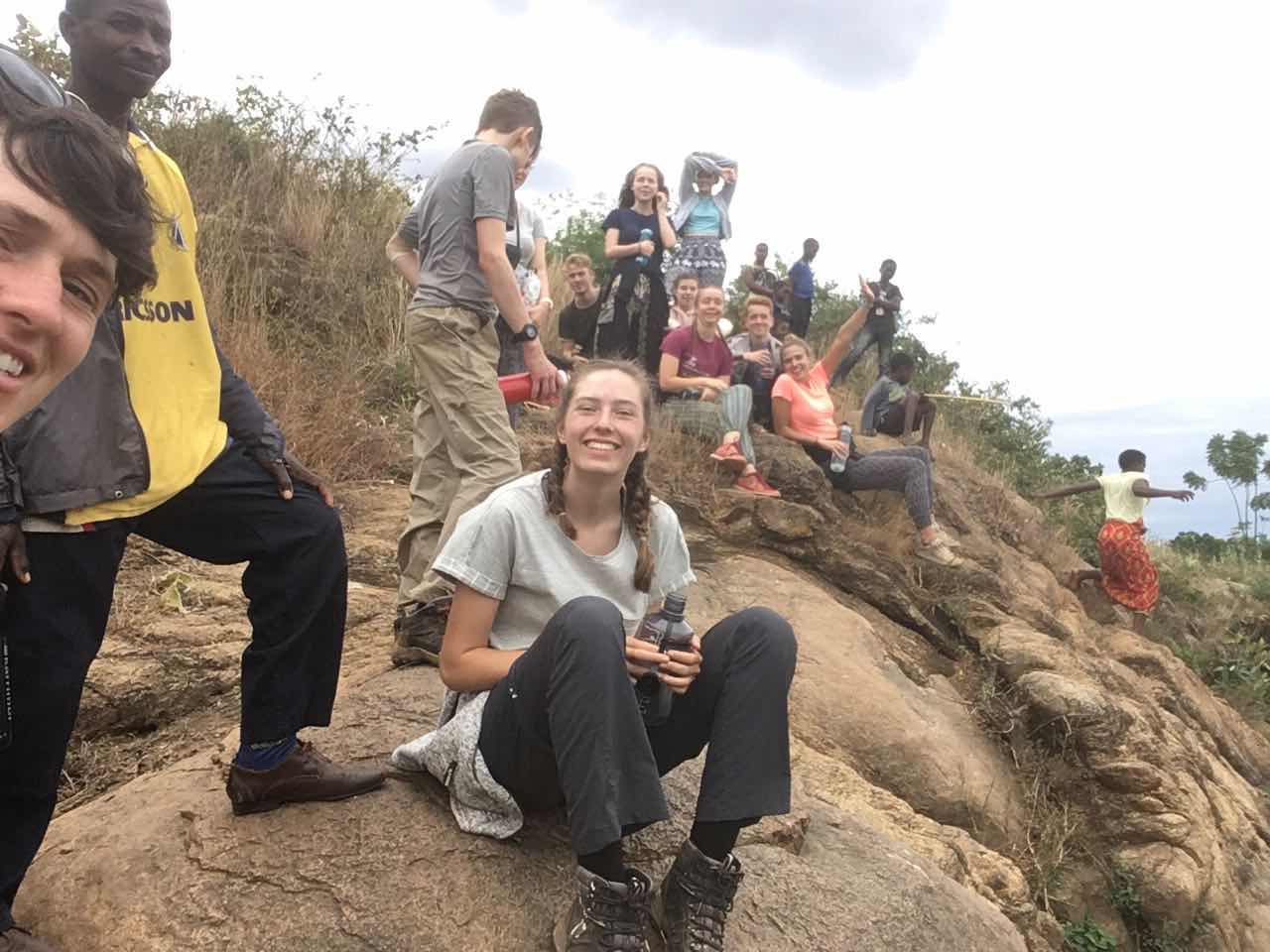 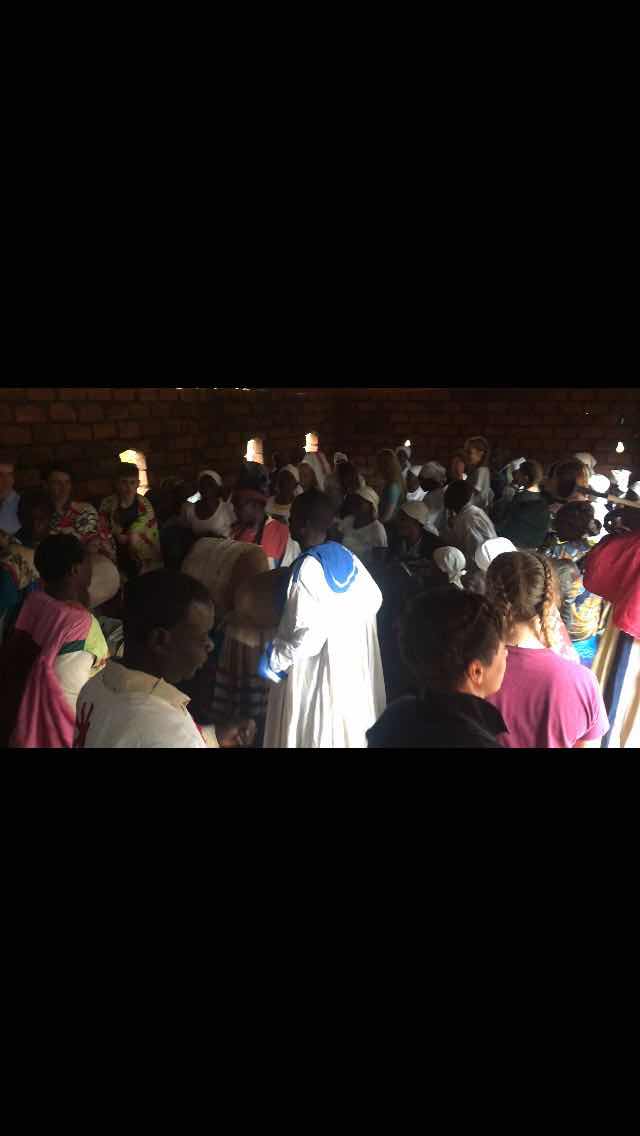 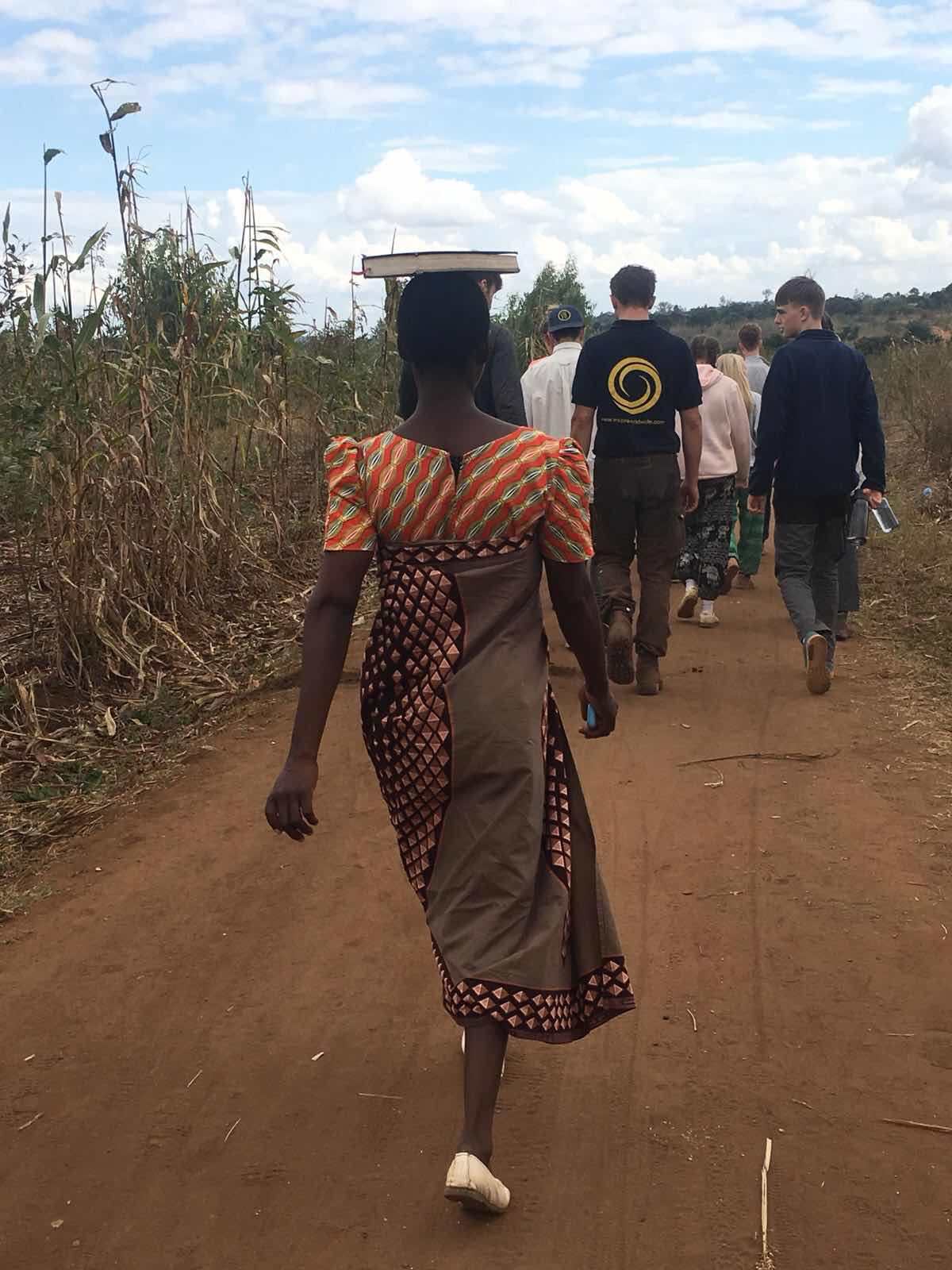 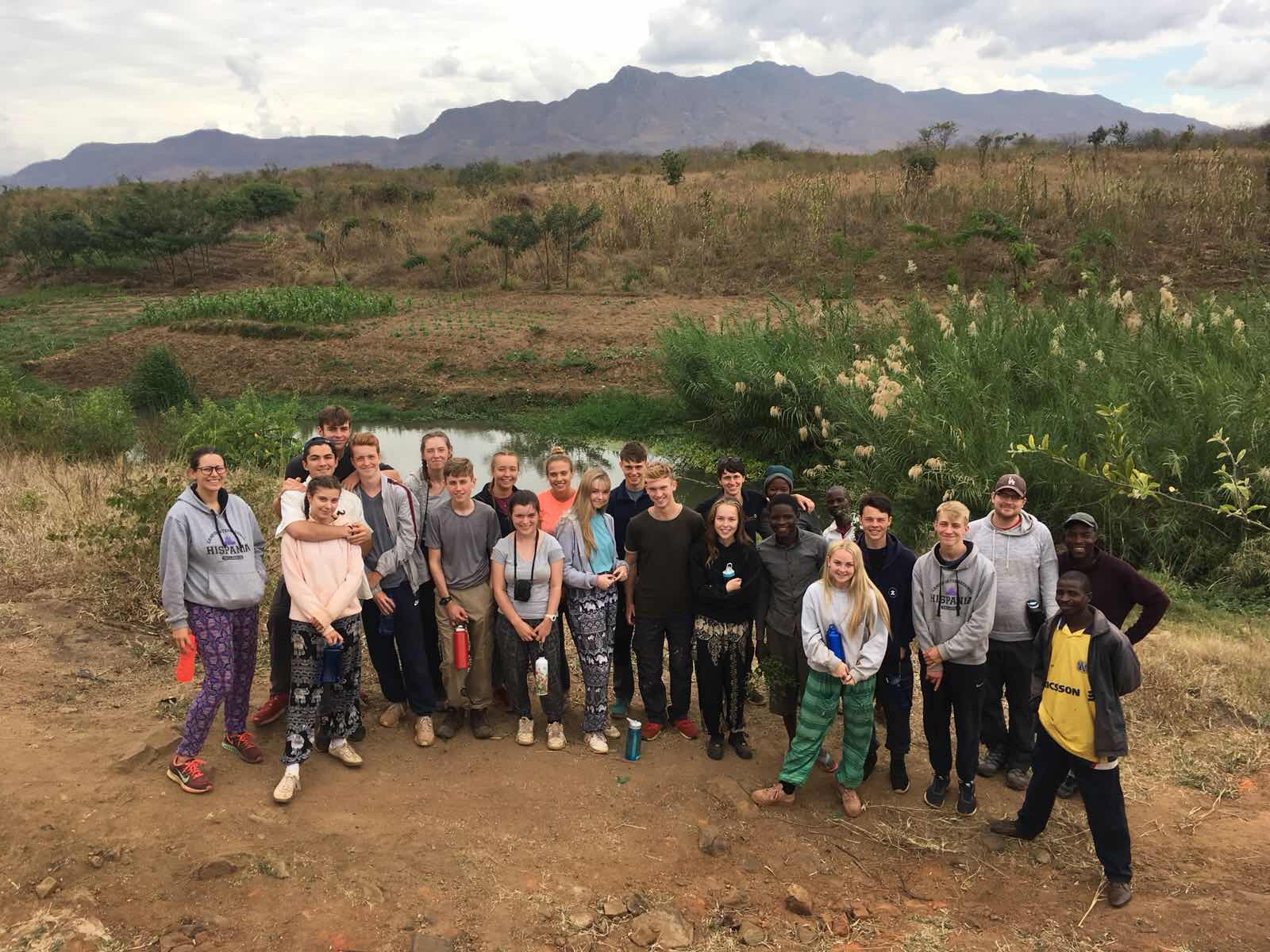 Posted by Inspire Worldwide at 13:25 2 comments: